So I was on a plane to Florida…

Monday morning after only a couple hours of sleep thanks to a late night at Yankee Stadium, I boarded a plane from LaGuardia Airport to Palm Beach to visit my parents. It was just another too early Monday morning flight, I settled into my seat and soon fell asleep. Somewhere over North Florida I woke up, found out we’d be able to see the Space Shuttle Endeavor, I moved over to the window seat and with my iPhone (airplane mode on) in my hand, took a few pictures that over the next 48+ hours, would make their way around the world.

After landing and while waiting for my suitcase at baggage claim I checked into the airport on Foursquare and then I tweeted “Three things about my flight: I can lay down across 3 seats just fine, it was freezing & I got to see this.” I included the following photo: 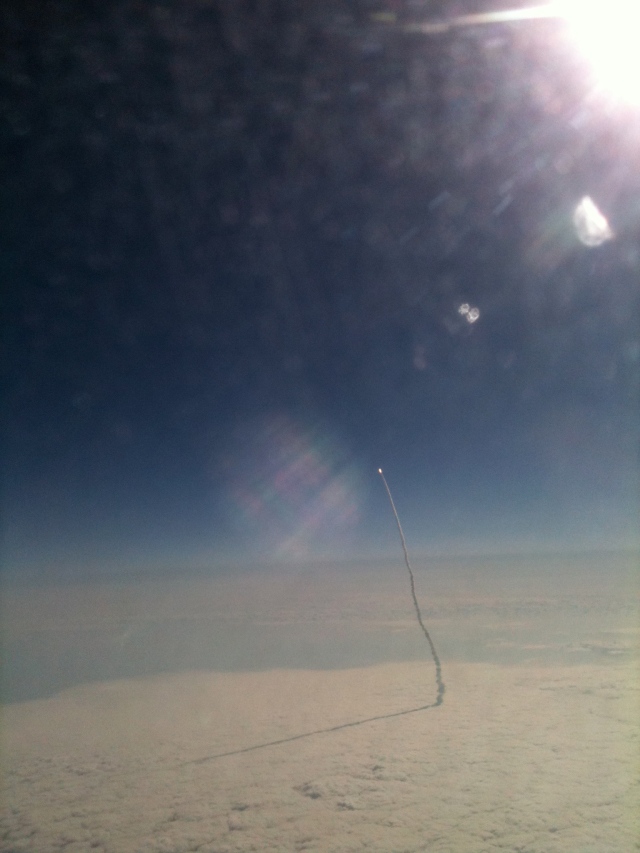 Next thing I knew I had to turn off my Echofon mentions on my phone because my phone wouldn’t stop vibrating. Turns out the picture above and the photo below had gone viral!

What has happened over the last few days has been, for lack of better words, crazy and overwhelming. My picture has been tweeted by @BreakingNews, @NASA, @WeatherChannel and @JimCantore (of the weather channel), just to mention a few and now my 2 tweeted photos have been viewed almost 800,000 times!

I have been interviewed by (please forgive me if I missed one):

And possibly the coolest thing…Brian Williams from NBC blogged about me!!

I know there are other blog posts and articles about the photos and me, but I can’t list them all. I suggest you just Google my name if you really care that much. A cousin of mine posted on my Facebook page that she had and suggested I do the same. All I did was type in “Stefanie” and my last name was the first name to pop up! I was above Stefanie Powers (I spell my name with an F because of her, my Dad liked the spelling).

I’m not going to go into anymore details because, well…you’ve probably already read them in any of the above pieces or saw the interviews on TV or read my tweets.

If you didn’t know all of this, you must have been living under a rock!

Suddenly my Twitter following has gone from just about 1,800 on Monday morning to over 5,400 as I type this on Wednesday night. I had intended to write this blog post Tuesday morning but because of interviews all day Monday and Tuesday and then spending the day with my mom for her birthday today, I find myself finally getting around to finishing my side of the story.

This whole viral situation has completely caught me off guard. I never thought anything of the magnitude my photo would have when I sent an innocent tweet moments after I landed in West Palm Beach. I am still in shock about it all. Will this lead to bigger and better things? Well as someone who is currently seeking full time employment….I hope so. As a matter of fact my Twitter friend @Metsgrrl suggested I tweet that I’m looking for a new job and to post my Linkedin profile. So that’s exactly what I did!

So far nothing solid has come though, but there are a few possibilities out there.

If you have found my blog because you clicked on a link in an article about me, or on my twitter page, HI! Thanks for reading. I tweet mainly about sports, and only once in a while about Space Shuttle launches. I take pictures of everything from Yankees games, to crazy clothes I see in stores, to random amazing things I see while walking around cities such as Manhattan. Photography is a hobby. I blog mainly about my experiences in life, sporting events I attend, or sports in general. I don’t blog just to blog. I blog because I have something to say and I think one or two people might want to read about it.

Monday morning I boarded a plane for a week of relaxing, sending out resumes and most importantly, to celebrate my mom’s birthday in Florida. Monday afternoon I became an instant “15 minute celebrity” for a few pictures I took with my phone.

Just a girl, who has typical and not so typical girl thoughts. Use this space to talk about anything and everything.
View all posts by Not Your Typical Girl →
This entry was posted in career, Social Media, Travel, Twitter, Uncategorized and tagged airline, blog, delta, Endeavor, family, jobs, social media, Space Shuttle, twitter, Viral, Yankees. Bookmark the permalink.

251 Responses to So I was on a plane to Florida…