The End of a Yankee and a Family Era

**NOTE: I’m posting this on Sunday as Derek Jeter has already left the game after going 1-2 with an RBI single at Fenway Park, but wrote this on Friday morning with my emotions still raw from Thursday night.** 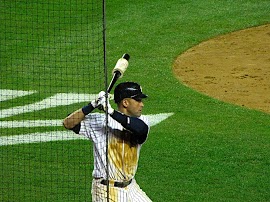 I took this photo at the first game ever played at the new Yankee Stadium back in 2009 (Photo: Stefanie Gordon)

Last night I witnessed the end of an Era. Not only was last night the final home game of Derek Jeter’s amazing Hall of Fame career, but also the last game I will witness with the connection between my grandfathers’ Yankees and my Yankees still intact. Yes, the Yankees have three more games to play up in Boston, but I am typing this on my way to Madison, Wisconsin to watch my University of South Florida Bulls take on my brother’s University of Wisconsin Badgers for the first time ever tomorrow afternoon. So chances of seeing another Yankees game live are slim. Yes, I have the DVR set for Sunday, but watching a game on replay is just never the same as watching it live (I watched Jeter’s last AB live on my phone, isn’t the future great?! And yes…I teared up). 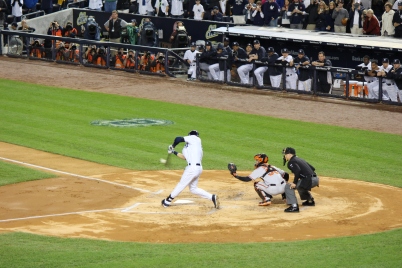 If we’re friends or family you know my connection to the Yankees runs deep. My grandfathers saw amazing milestones at Yankee Stadium like Lou Gehrig’s speech, Don Larson’s perfect game, Chris Chambliss’ home run, etc etc etc. My grandfathers weren’t just Yankees fans, they were baseball fans they loved and respected the game. My Grandpa Morris was probably the biggest Yankees fan you could have ever met. He would watch games, or talk about the team whenever possible. Even when we all moved to Florida, when I was in high school, and he was forced to watch the Marlins, he still spoke about the Yankees. I’ve told this story before, give my grandfather a date, he probably could have told you if the Yankees played, who pitched, who scored the winning run, etc. Grandpa Morris shared his love of the Bronx Bombers with my dad. And my brother and I inherited that love from our dad. 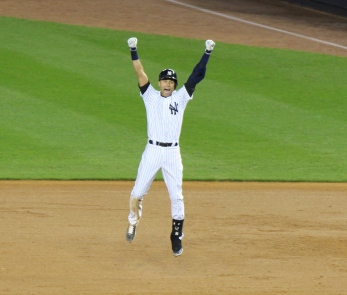 The day my Grandpa Morris died, the Yankees clinched the American League to face the Arizona Diamondbacks in the 2001 World Series. I remember being on my phone with my dad, sad that my grandpa was gone and instead of consoling my dad over the loss of his father, he was consoling me. My dad’s words that evening will live with me forever, “Go watch and root on the Yankees, that’s what Grandpa would want you to do.” Of course, that’s what I did. A few days later, my family gathered in New Jersey for my grandpa’s funeral. As we stood by the grave, my father spoke about the man his father was and his last words were of course about my grandfather’s connection to the Yankees (and I’m paraphrasing here…this was 13 years ago) “My dad saw some great Yankee players, from Babe Ruth, to Lou Gehrig, to Joe Gordon, to Mickey Mantle (Dad’s favorite player), to Derek Jeter. That’s pretty cool.” Wow…can you imagine being that lucky? Who else was that lucky? My grandfathers were both over 90 years old when they passed in 2000 and 2001. That’s A LOT of Yankees baseball.

So last night was the last Yankees connection I had to my grandfathers. The last of the players they watched are no longer wearing pinstripes and Bob Sheppard. All gone. No more. Sure, we’ll probably (hopefully) always hear Mr. Sheppard welcome us to Yankee Stadium. Welcome us to Old Timer’s Day. Tell us we’re watching the Yes Network. But we’ll never hear him announce a player as they come up to the plate. No more, “Now batting for the Yankees number 2, Derek Jeter, number 2.” Almost fittingly, the last time we heard that was right before the captain laced an opposite field walk-off hit in the bottom of the ninth. Only thing more perfect would have been if he did that to win the World Series. Unfortunately, that wasn’t meant to be. Mr Sheppard’s voice during a game is now just a memory. Something we’ll only hear during “Yankees Classics.”

I often wonder what my grandfathers would think of the new Yankee Stadium. They’d probably say the same thing my dad did the first time he saw it “It’s cool….but it’s not the same.” Ok, they wouldn’t have said, “cool” but you get the idea. 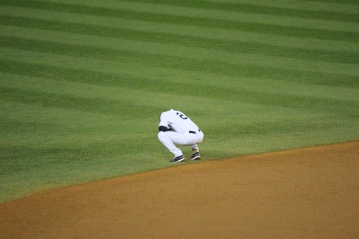 I’m lucky to have witnessed last night in person. I’m lucky to have witnessed Derek Jeter’s full career, even as a prospect at Spring Training while he wore number 74. I’m lucky that I still have my dad to share more Yankees memories with. Joe DiMaggio famously said, “I want to thank the good lord for making me a Yankee.” Well, I want to thank my grandfathers for making me a Yankees fan.

Here are my photos from Thursday night: http://bit.ly/1CDN7y1 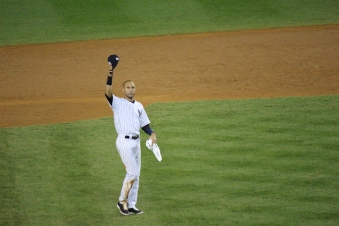 Just a girl, who has typical and not so typical girl thoughts. Use this space to talk about anything and everything.
View all posts by Not Your Typical Girl →
This entry was posted in Sports, Yankees and tagged baseball, derek jeter, new york yankees, yankee stadium, Yankees. Bookmark the permalink.