I’m sitting here on the verge of tears (shut up) as I read that Derek Jeter will retire at the end of this season. I have always hoped he would just announce that he was done after a season. No farewell tour, no final game at the Stadium. Just a “thanks for the memories” announcement once the Yankees season was over. This is not to be.

Now, I sit here having to prepare myself for my favorite player’s final season. This is more difficult for me to process than Mariano’s announcement last February. I suppose last season was a dry run for “Life after Jeter” since he missed most of the season due to injury. But he was alway there, when not rehabbing, rooting on the team from the dugout and we always had the thought in the back of our minds “Well, if he can get healthy, he’ll play again this season”. 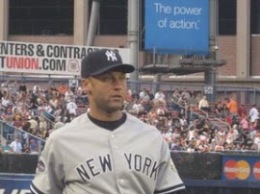 So here we are Yankees fans. We’re facing our last season with the Captain. #2. The face of the Yankees since 1996. The player who only wanted to grow up to be a New York Yankee. How will things be after this season? Who knows. But one thing I do know. I am lucky that I was raised a Yankees fan (Thank you Dad, Grandpa Jack and Grandpa Morris). That Derek Jeter is our shortstop and has been a constant for so many years, and I’ll miss seeing him on the field, doing his jump throw, holding his hand out to the umpire has he readies himself in the batters box and being the first player to congratulate a teammate for scoring a run. A generation of athletes have grown up watching Derek Jeter and looking to him as a role model of how player should be.

Of course now I need to reevaluate my plans for the last weekend of the baseball season. I had planned on flying to Madison, Wisconsin to see South Florida play Wisconsin at Camp Randall on Saturday and then possibly drive to Milwaukee on Sunday to see a Brewers game. But now, with Jeter’s announcement, I have to ask myself: Do I forgo this trip and make plans to be at Fenway Park on 9/28/14? Or, do I still go to Madison and let 9/25/14 at the Stadium be the last time I see Derek Jeter play a (regular season) game?  Some of you might laugh, but this is a serious thing I will have to contemplate.

Just a girl, who has typical and not so typical girl thoughts. Use this space to talk about anything and everything.
View all posts by Not Your Typical Girl →
This entry was posted in Marketing, Sports, Uncategorized, Yankees and tagged baseball, derek jeter, mlb, new york yankees, reitrement, Yankees. Bookmark the permalink.