Newest Additions To My Sports Wardrobe

Before the New York Rangers season started I began a love affair with their newest rookie, Derek Stepan.  Not THAT kind of love affair, but the kind of love affair where I appreciate what he does on the ice.  He worked hard during the preseason and fought to make the opening night roster (in which he became the first American and Ranger player to score a hattrick in his first NHL game).  Earlier this year he was the Captain of the USA team that won the Gold Medal at the IIHF World Junior Championships.  Oh…and he also played two years at the University of Wisconsin.  If you follow my Twitter account you know I’m a huge Wisconsin Athletics fan as my brother is an alumnus.

Before the season started I decided I would purchase a Stepan Wisconsin hockey jersey. Unfortunately, the school does not sell player jerseys, so I bought a blank jersey and had letters and numbers added thanks to Gerry Cosby & Co., Inc. Sporting Goods on West 31st Street a block from Madison Square Garden. 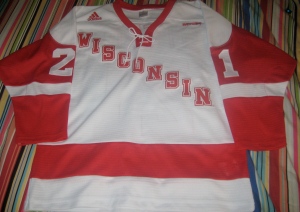 Front of my New Wisconsin jersey 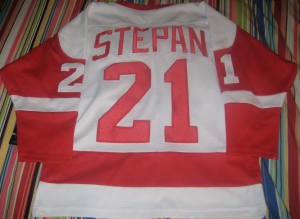 Back of the jersey. Yes, Stepan also wore #21 at UW

Now for the really exciting story:

Then, on November 17th, ,while watching the Rangers take on the Bruins, I noticed others on Twitter were using the hashtag #amexsports.  A few minutes later some followers won tickets to a Rangers game or the brand new “heritage” 85th Anniversary/ 3rd jersey.  So I began to send tweets about the Rangers and included #amexsports.  Next thing I knew…I received this tweet:

@AmericanExpress
@Stefmara Well, SURPRISE! You won @theNYRangers 85th anniv jersey! Thx for tweeting with us….. #AmexSports
Needless to say, I was just a little excited.  So what does the jersey look like? Is it a blank jersey or does it have a player’s name/number on the back…see below to find out! 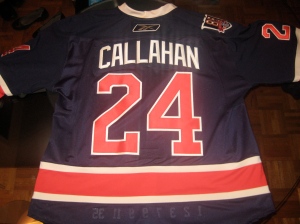 I didn't get to choose the player, but it's fitting since I wanted Ryan Callahan's Olympic jersey

The unseen details are amazing! 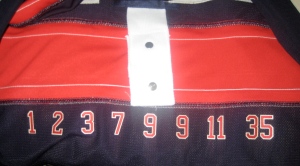 The numbers above are the Rangers retired jerseys: 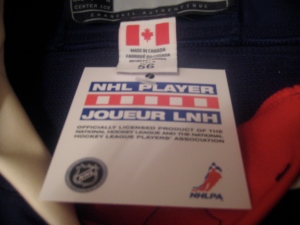 Size 56 jersey means it's HUMONGOUS on me!

I would again like to thank American Express for the jersey, although I will never wear it I will treasure it as it is my first official Rangers jersey…my Lundqvist jersey is a replica.

Just a girl, who has typical and not so typical girl thoughts. Use this space to talk about anything and everything.
View all posts by Not Your Typical Girl →
This entry was posted in Hockey, Social Media, Sports, Twitter and tagged american express, Derek Stepan, Hockey, New York Rangers, Ryan Callahan, twitter, University of Wisconsin. Bookmark the permalink.

1 Response to Newest Additions To My Sports Wardrobe